Neurofeedback training is based on the principle of operant conditioning, which involves rewarding an individual for inhibiting certain brain waves and increasing others, depending on their levels of cortical arousal.  An audio or visual stimulus is used for reinforcement during most NF training protocols.

Certain frequencies of brain waves are inhibitory, whilst others are excitatory.  This means that the stimulation of certain wave bands may be responsible for characteristics associated with over-arousal (e.g. fidgeting, hyperactivity and feelings of agitation), whilst others lead to features of under-arousal (e.g. poor concentration, spaciness, and day-dreaming)

As mentioned, different brain waves are associated with different states.  Brain waves are measured in Hertz (Hz) cycles per second, and can change across a wide range of variables.  When slower brain waves are dominant we can feel sluggish, inattentive and scattered, and can feel depressed or develop insomnia.  When higher frequencies abound, we are engaged in critical thinking, hyper-alertness or anxiety, but can also result in nightmares, hyper-vigilance and impulsive behaviour. 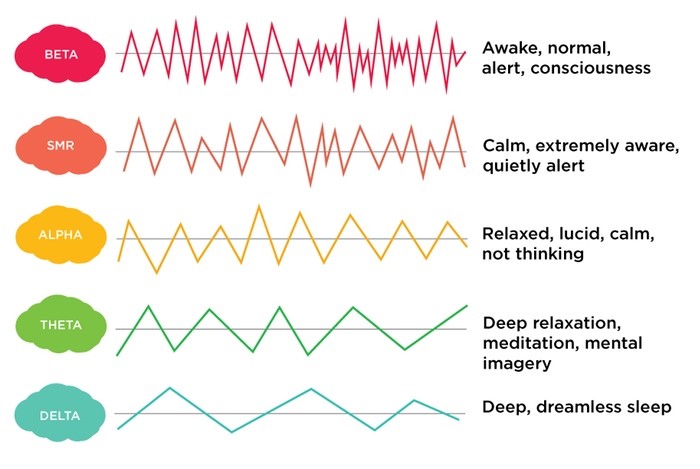 Delta Waves (1-4 Hz) are slow brainwaves, which begin to appear in stage 3 of the sleep-cycle, and by stage 4 dominate almost all EEG activity.  At this stage, healing and regeneration are stimulated, and are considered essential for the restorative properties of sleep.  An excess of delta waves when a person is awake may result in learning disabilities and ADHD, and make it extremely difficult to focus.  It has been found that individuals with various types of brain injuries produce delta waves in waking hours, making it extremely difficult to perform conscious tasks.  Sleep walking and talking tend to occur while delta production is high.

Research suggests that cortical circuits generate delta <1Hz, whereas higher-frequency delta rhythms are an intrinsic property of thalamacortical cells and intracortical network interactions. Importantly, delta may also reflect general neurotransmitter activity, specifically dopamine and acetylcholine. Because delta is active within brain networks that connect the cortex and insula with the hypothalamus and the brainstem, delta is closely involved with the physiological interface between the brain and the body. During delta wave sleep, neurons are globally inhibited by gamma-aminobutyric acid (GABA).

Theta waves (4-8 Hz) are particularly involved in day-dreaming and sleep.  Cortical theta is observed  frequently in young children, but in older children and adults, it tends to appear during meditative, drowsy, or sleeping states (but not during the deepest stages of sleep).  When we are awake, excess theta levels can result in feeling scattered or day-dreamy, and is commonly reported in ADHD. Too much theta in the left hemisphere is thought to result in lack of organisation, whereas too much theta on the right results in impulsivity. Theta in people with attention disorders is often seen more towards the front of the brain.

Frontal Midline Theta: Sinusoidal and high in amplitude (1-10 second bursts), generally occurs in response to events (ie. an ERP). This midline theta is associated with opening the sensory gate to the hippocampus for intermediate storage of episodic information. The frequency of frontal midline theta varies from 5-7.5 Hz, with an average of 6Hz. This rhythm is associated with working memory, episodic encoding and retrieval. It also appears during hypnosis and deep meditation. Frontal midline theta is thought to originate from the anterior cingulate. It mainly appears when one is performing a task requiring focused concentration, and its amplitude increases with the task load. It is mainly concentrated around Fz. When anxious and restless, the signal is reduced or even eliminated. When anxiety is medicated, the signal is restored. This suggests that the anterior cingulate cortex is involved in regulating the emotional state from restless anxiety to focused relaxation.

Hippocampal Theta: Has been found in the posterior cingulate, entorhinal cortex, hypothalamus and amygdala. Often more tonic and diffuse, and elicits and coordinates memory.

Alpha waves (8-12 Hz) dominate during moments of quiet thought, and similar meditative states.  Alpha is considered the “power of now”, being here and in the present of the moment.  It is the resting state for the brain, not unlike a car idling at a stoplight.  Alpha waves aid overall mental co-ordination, calmness and alertness, mind/body integration and learning. Alpha tends to be highest in the right hemisphere, and too little alpha in the right hemisphere correlates with negative behaviours such as social withdrawal. This is also seen in people with depression, particular with too much alpha frontally. Alpha is involved in active and adequate inhibition of the irrelevant sensory pathways.

Alpha appears to be closely involved with reticular activation, and participates in  binding mechanisms and resource allocation in regards to orientation and task sequences.

Alpha diminishes during sleep onset, while focusing on tasks, and is also a normal consequence of ageing. When alpha slows and theta increases in frequency, it is often an indicator of pathologically slowed high-amplitude alpha, which is associated with Parkinson’s disease and cognitive decline. This indicates degradation of myelination and cell death in the cortex, and reflects growing metabolic inefficiency.

After completing a task and given feedback, the high functioning brain shows increased levels of alpha. This is associated with consolidation of the task events, called post reinforcement synchronisation (PRS). This represents and alpha burst in the brain when the brain is consolidating information.

Beta waves (12-38 Hz) represent our normal waking state of consciousness when attention is directed at cognitive tasks and the outside world.  Beta is ‘fast wave‘ activity and dominated when we are alert, attentive and engages in problem-solving, decision making and focussed mental activity. Low beta (12-15 Hz) is thought to be ‘fast idle’, or musing thought, Beta (15-22 Hz) is high-engagement and actively figuring things out, and finally, High Beta (22-38 Hz) is highly complex thought, integrating new experiences, high anxiety or excitement.  Continual high frequency processing is not an efficient way to run our brains , and can result in tension and difficulties relaxing, and if present at night, can result in difficulties settling the mind and falling asleep. Beta waves tend to dominate in the left hemisphere, and too much beta on the right can be correlated with mania.

There are discrepancies regarding how the three levels of beta and gamma divide their territory in the brain. While it is widely agreed that higher beta frequencies are more correlated with arousal, some convincingly suggest that they are mostly a result of muscle artefact. For example, Helleter et al. found that anxiety was highly correlated with elevated right hemisphere beta, and more recent work has found that insomnia is correlated with higher temporal lobe frequencies of beta, and migraines are associated with central high beta.

Gamma brainwaves have the highest frequencies of any brainwave, oscillating between 30 (ish) to 100 Hz. They are associated with peak concentration and high levels of cognitive functioning. Low levels of gamma acitivity have been linked with learning difficulties, impaired mental processing and limited memory, while high gamma activity is correlated with a high IQ, compassion, excellent memory, and happiness.

Gamma is currently of limited clinical value, as it is argued that it cannot be effectively measured using current EEG technology, due to muscle contamination. While promising research has suggested that Gamma training can be successfully implemented to enhance intelligence, it will not be of proper clinical use until this issue of technology is resolved.

Gamma and theta work together to recruit neurons which stimulate local cell column activity. As such, it is associated with cortical processing related to cognitive functions, and is also potentially related to meditative states, although research on this relationship is vague. 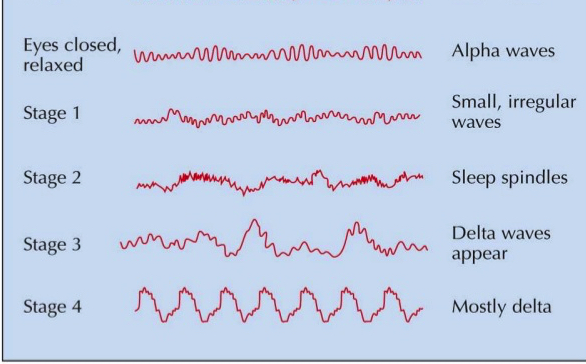 What is EEG? How is it generated?

The EEG is recorded from the surface of the head. Measurable surface potentials (microvolts) are produce by neurons in the brain in the top layer of the cortex. The cortex contains the outer information processes of the brain. The main EEG signals are produced by pyramidal cells as these are oriented in a manner than produced measurable voltage. The brains electrical sources are dipoles, which is a charged entity that had a positive and negative side (similar to a battery). The EEG is a epiphenomenon (side effect) of the brain’s activity, but is not a direct measure of information processing such as a recording of action potentials.

The Role of Quantitive EEG (qEEG)

Common brain imaging techniques such as MRIs  & CAT scans are built to measure brain structure. An EEG measures brain activity. A QEEG brain map enables us to see areas of the brain where there is too little or too much activity, and areas that are not coordinating their activity the ways in which they should. These maps are created by comparing the values to a normative database (ie. the scores are compared to people the same age). An EEG uses surface sensors to detect the brain’s electrical patterns (known as brainwaves). A qEEG (Quantitiave EEG) can identify not only brainwaves, their amplitude, location and whether these patterns are typical or dysregulated, but also Coherence (quality of communication between regions), and Phase (thinking speed). These are all crucial patterns involved in optimum mental functioning. 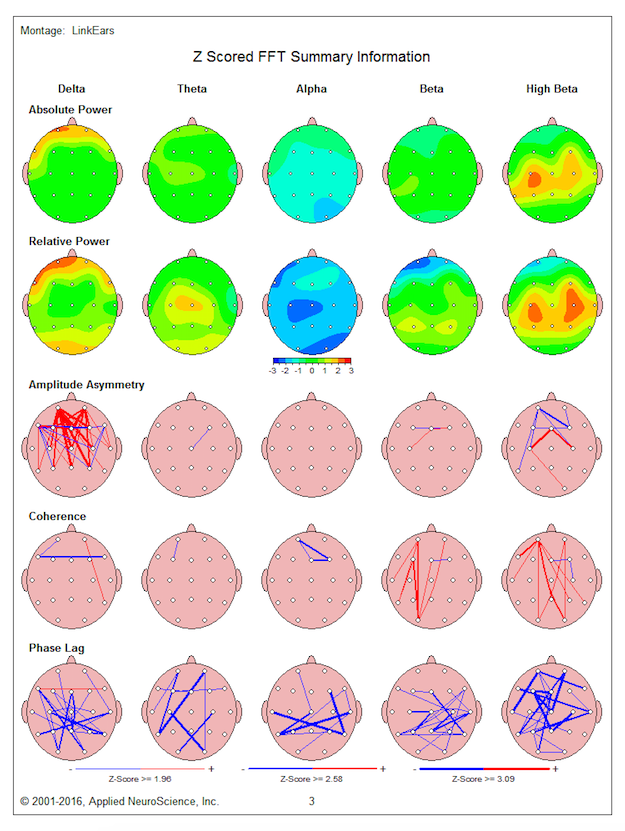 Absolute Power: How much brain power is available?

Absolute Power represents the electrical power in each band of EEG and it is compared to all other individuals in the database, which determines whether the results are typical or atypical. The voltage produced by the brain is measured at each of the sites. It aids in determining whether enough brainpower within a particular frequency range is present at each recording site. The colour coding represents the intensity of the difference between the client and the normative group. The scale ranges from negative to positive values (measured in Z-scores/values).

Relative Power: Who is in charge here?

Amplitude Asymmetry shows whether the brain waves between various parts of the brain are balanced by telling us the difference in power between the left side and the right side of the brain. Excessive activity may indicate an over-firing of brain cells, while insufficient activity may suggest brain cells are not firing sufficiently to maintain proper brain function. Both will lead to inefficient brain function.

Coherence: How efficient is my brain’s ability to communicate with itself?

Areas of high coherence show over-communication and suggest that the brain has become overly dependent on those centres instead of efficiently processing and executing information. This often results in poor day to day performance. Areas of low coherence show under-communication. In both cases, plasticity and function suffer. The more extreme the coherence readings, the more disordered the brain. If coherence is extremely high (measured with Z scores), there is limited regional communication, division of labour, connectivity and regional cooperation. If coherence is extremely low, there is limited to no connection occurring between regions. It may be worthwhile to note that noise from volume conduction and thalamic input may confound the validity of the connectivity measure hence it needs to be interpreted with caution.

Phase Lag: Is the brain’s electrical energy moving at the optimal speed for adequate to superior performance?

This is the measurement for the energy from one part of the brain arriving at another area at just the right moment to perform a specific task. High phase means the signals arrive too early. Low phase means the signals arrive too late. In both cases, the brain is not operating at optimal efficiency. Phase is particularly meaningful in relationships to coherence measures.