Nearly everyone will experience a shocking, frightening or dangerous situation and have an instinctive “fight-or-flight” response which helps defend us against danger or to avoid it. We may feel stressed or scared during and after the traumatic event and this heightened sensation usually disappears after some time. However, some individuals develop an ongoing (chronic) or short-term (acute) form of anxiety where they continue to feel stressed or vulnerable despite there being no immediate danger or harm to them. When this anxiety interferes with daily functioning for more than a month, the person may have Post Traumatic Stress Disorder (PTSD). An individual with PTSD may have exaggerated fear responses and/or the inability to control their fear responses as well as intrusive memories of the trauma, which are often vivid and evoke a “revival” of their traumatic experience in the form of recollection. The symptoms may appear weeks or months after the traumatic event. Some of the symptoms can be categorised into arousal and reactivity symptoms such as having difficulty with sleeping, having angry outbursts, feeling “on edge” and being easily startled.

Research has shown that individuals with PTSD have difficulty in areas of attention, learning and memory. There is evidence that individuals who go on to develop PTSD encode and process of trauma-relevant material differently than those who do not develop PTSD. Studies suggest there is altered functional activity in brain regions responsible for emotion regulation, mediation of emotion processing and extinction learning. Although there are limited number of studies that have investigated the efficacy of neurofeedback on PTSD, there are a number of studies to indicate neurofeedback helps with symptom amelioration.

In 2018, Trivendi reviewed previous research in the effectiveness of neurofeedback as a treatment for PTSD. The eleven studies examined used a variety of different neurofeedback techniques but found evidence to support neurofeedback as a viable treatment PTSD symptoms such as anxiety, depression and hyperactivity. Some studies also showed reduced rates of substance abuse, relapse, and need for medication.

In 2017, Nicholson and colleagues reported a small study of 10 PTSD patients, treated with three sessions of neurofeedback to downregulate the amygdala. Trials were conducted to regulate amygdala activation or view without regulating. PTSD patients were all successfully able to downregulate left and right amygdala activation. Increased activation was observed in the dorsolateral and ventrolateral prefrontal cortex (PFC) in the regulation trials compared to the view only trials. In addition, PFC activation was negatively correlated with PTSD dissociative symptoms.

In 2016, Gerin and colleagues conducted a preliminary feasibility study examining the effect of amygdala-targeted neurofeedback training involving three combat veterans suffering from chronic PTSD. Two of the veterans showed clinically significantly improvements in PTSD symptomatology and the other had a smaller reduction. Examination of the resting-state functional connectivity patterns showed a normalisation of brain connectivity consistent with clinical improvements. A slightly larger study by Gapen and colleagues also carried out in 2016 investigated the effect of neurofeedback on the symptoms of PTSD in a group of 17 long term PTSD sufferers who were previously treatment resistant. 40 Neurofeedback sessions, carried out twice per week significantly reduced but did not abolish the symptoms of PTSD.  Alpha-theta brainwave training in 15 hospitalised veterans suffering with PTSD was compared with 15 matched controls undergoing no neurofeedback in a study by Rastegar and colleagues (2016). Neurofeedback significantly reduced omission errors, commission errors and reaction times while increasing correct detection on the Continuous Peformance Test, a test of sustained attention.

Van der Kolk and colleagues (2016) published a small randomised controlled study of neurofeedback in chronic PTSD sufferers. 28 patients were treated with neurofeedback and compared to 24 waitlist controls. Neurofeedback was carried out twice a week for 12 weeks. After neurofeedback 27.3% met the criteria for PTSD compared with 68.2% in the waitlist group.

Reiter, Anderson and Carlsoon (2016) conducted a systematic search of Cochrane, Embase, PubMed, and PsychInfo databases and looked at the effectiveness of neurofeedback as well as preferred protocols. Of the five studies that were looked at in the review neurofeedback showed a significant effect in three of them. The researchers also noted neurobiological changes in three studies.

Rastegar and colleagues in 2016, investigated neurofeedback training in attention of veterans with PTSD hospitalised in psychiatric wards. The finding were significant in improved sustained attention and found neurofeedback to be a treatment with reasonable results in relation to alpha and theta waves.

Another recent study in 2016 by Gapen and colleagues, found neurofeedback therapy significantly reduced PTSD symptoms in patients with chronic PTSD. Participants completed 40 sessions of neurofeedback two times a week. The findings provide evidence for the use of neurofeedback for individuals multiply-traumatised with treatment-resistant PTSD.

In 2015, Foster and Thatcher reported that LORETA neurofeedback was specific in alleiviating the symptoms of PTSD and effective in the treatment of PTSD. The study revealed that 8 combat veterans with PTSD trained in multiple EEG power and connectivity in multiple neural networks via multiple neurofeedback methods, including low-resolution EEG tomographic analysis (LORETA) and Z-score neurofeedback (LZN), allowed highly  individual-specific neurofeedback personalised for their patient’s specific symptoms and their desired treatment outcomes. Moreover, results revealed normalisation of the PTSD-affected neural networks trained as well as a reduction in PTSD symptoms. 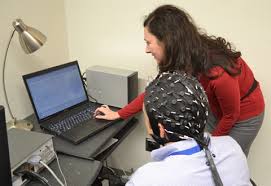 In EEG neurofeedback, electrodes are placed on the scalp to read and
display the brain’s activity from which the patient can interpret and respond.

In 2016, Sebern Fisher, one of the leading neurofeedback specialists in trauma, published a case study regarding the long term treatment of “Bea”, a survivor of repeated and complex developmental trauma, via trauma-focused psychotherapy combined with electroencephalography (EEG) neurofeedback. Bea’s case is described alongside a brief introduction to a rationale for including EEG neurofeedback as an intervention for complex developmental trauma-related disorders. This inspirational case provides good support of what neurofeedback can achieve on a personal and deep level providing much hope for trauma sufferers.

In 2013, Kluetsch and colleagues conducted a study where twenty-one individuals with PTSD related to childhood abuse had successfully reduced their alpha rhythm amplitude after 30 minutes of EEG neurofeedback training. Results showed that the reduced alpha amplitude was associated with post training alpha “rebound” and increased resting alpha synchronisation. This was also associated with network connectivity changes that were associated with increased calmness.

Also in 2013, Wahbeh and Oken examined veterans with and without PTSD, and established that, as high-frequency heart rate variability (HRV) and peak alpha frequency are sensitive to PTSD status, it would be considered a potential biofeedback parameter for future trials relating to PTSD.

In 2012, Nelson and Esty implemented a novel variant of EEG biofeedback called the Flexyx Neurotherapy System in the intervention for seven treatment-refractory Afghanistan/Iraq war veterans, which brought about significant decreases in bothersome neurobehavioral and posttraumatic stress symptoms. These results indicated that FNS may help ameliorate mixed trauma spectrum syndromes.

Following advances in neuroimaging, as well as a surge in the number of military servicemen and women returning home from Afghanistan and Iraq, Brenner (2011) reviewed the neuroimaging and neuropsychological findings in regard to PTSD and traumatic brain injury (TBI).  When focussing on the PTSD research, Brenner concluded that neurobiological activation is considered to influence functioning – and that alteration to or chronic activation certain structures (particularly the limbic system and prefrontal cortex) is detrimental to longterm mental and physical wellbeing.  Furthermore, of these implicated regions, it is believed that reduced hippocampal volume and other neurobiological alterations are pre-morbid and contribute to the development of post-traumatic stress disorder.

Furthermore, in 2009, Othmer and Othmer investigated the application of neurofeedback on PTSD in veterans.  The study found that, when implementing traditional sensorimotor alpha/beta protocols, that low frequencies (as low as 0.1 Hz) were of particular use when attempting to remediate the symptoms of PTSD.

In 2008, Smith conducted a study involving 10 military veterans whom exhibited PTSD induced depression and decreased levels of attention. After 30 sessions of neurofeedback (alpha-theta) training, all participants showed a significant and large reduction in PTSD and depression symptoms, as well as an increase in attention levels.

Sokhadze, Stewart and Hollifield (2007) utilised an integrative cognitive-behavioural and bio-behavioural approach to examine patients with co-morbid mental and substance abuse disorders and PTSD. As these disorders presenting with comorbidity represent significantly reduced treatment outcomes, the authors suggest that by examining both neurobiological and cognitive treatment methodologies, such as qEEG, successful treatment will prove far more likely.

During 2004, Pop-Jordanova and Zorcec investigated the role of biofeedback therapy as a possible mechanism for remediating attachment issues associated with the effects of childhood trauma. The study examined both boys and girls (mean age = 9 years), found consistent behavioural issues (aggression, anxiety and stress) as well as non-developed right orbito-frontal cortices (ROFC), which are all consistent with an insecure early attachment.  Upon examination, the results based on biofeedback therapies were encouraging.

In a similar study to Peniston & Kulkosky’s 1991 study, Peniston, Marrinan, Deming and Kulkosky (1993) again found that alpha-theta brainwave training had significantly reduced anxiety provoking nightmares/flashbacks and that only a few participants (4 out of 20) had relapsed after 26 months. Most of the participants could also reported that the trauma-related memories were essentially anxiety free during and after the neurofeedback treatment.

In 1991, Peniston & Kulkosky examined neurofeedback training (coined alpha-theta brainwave training) as an alternative treatment for combat servicemen. The study recruited 29 Vietnam veterans suffering from chronic war-related PTSD and frequent anxiety-evoking nightmares/flashbacks. In comparison to the 14 participants who received traditional medical treatment (tricyclic antidepressants, antipsychotics, and anxiolytics), the 15 participants who received the thirty 30-minute neurofeedback sessions had significantly reduced their PTSD symptomatology. Furthermore, a follow-up after 30 months showed all the participants in the traditional medication group had relapsed, whilst only 3 of 15 neurofeedback participants had begun to experience the flashbacks again, reflecting the promising effects of neurofeedback in relapse prevention.

Early evidence of the benefits of neurofeedback training on PTSD were revealed in an investigation on the effects of combined neurofeedback and relaxation training on 6 patients with PTSD symptoms (Hicking et al., 1986). After 8-14 sessions, results revealed slight to marked improvements for patient treatment outcomes including improvements on the State Anxiety Inventory Scale and Beck Depression Inventory, decreased overall MMPI scores, as well as lowered EMG and subjective tension ratings for all patients. These results suggest that the use of neurofeedback in combination with relaxation training would be a useful component as part of a comprehensive treatment program for PTSD.

Foster, D. S., & Veazey-Morris, K. (2013). LORETA Z score neurofeedback in the treatment of veterans with PTSD and TBI. Proceedings of the 2013 ISNR conference, Journal of Neurotherapy, 17: 276. Paper presented at: 21st Annual Conference of the International Society for Neurofeedback and Research. Dallas, TX..

Smith, W. D. (2008) The effect of neurofeedback training on PTSD symptoms of depression and attention problems among military veterans. ProQuest Dissertations and Theses.

Walker, J. E. (2010). Recent Advances in Quantitative EEG as an Aid to Diagnosis and as a Guide to Neurofeedback Training for Cortical Hypofunctions, Hyperfunctions, Disconnections, and Hyperconnections: Improving Efficacy in Complicated Neurological and Psychological Disorders. Applied Psychophysiology and Biofeedback, 5.1 3-4.