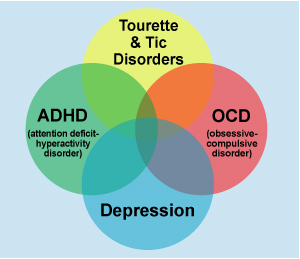 Gilles-de-la-Tourette syndrome (GTS) is a neurological disorder, characterized by rapid, repetitive and involuntary muscle movements and vocalisations called “tics”. Historically, GTS has been a challenge to treat effectively, especially given 50% of patients suffer from ADHD comorbidity (Farkas, Bluschke, Roessner & Beste, 2015).

Recent research has proposed neurofeedback as a promising treatment option for GTS, particularly in terms of helping patients control their tics and treat the cognitive dysfunctions commonly associated with GTS (Farkas, Bluschke, Roessner, & Beste, 2015). This is because neurofeedback can be used to gain attentional control over one’s own SMR and reduce excessive theta wave activity in the frontal lobes. Furthermore, attentional control particularly in response to visual feedback has been shown to be a crucial mitigating factor in frequency and severity of tics (Brandt, Lynn, Obst, Brass & Münchau, 2015). Studies exploring the role of visual attention and feedback in GTS patients show that after being presented with films of them being still compared to a short film of them ticking has shown increased tics in the condition where visual feedback showed excess ticking. Thus, attentional training seems a core issue to address in the treatment of GTS, presenting NFT as a therapy capable of inducing signifcant symptomal relief.

While research exploring the efficacy of neurofeedback treatment (NFT) for GTS is still in its infancy, case studies attest to its significant therapeutic potential. A randomly-controlled trial is, in fact, currently underway at Yale University looking at the efficacy of NF in allowing patients with tic disorders to control activity in the region of their brain that has been associated with the urge to tic.

According to Farkas, Bluschke, Roessner, & Beste (2015), deficits in executive functioning which contribute to ADHD symptoms also appear in GTS, with  the same losses of structural integrity in the cortico-striatal and  cortico-thalamic pathways common to both disorders. Neurophysiological processes governing these defecits in executive functioning have proven modifiable by neurofeedback.

Clinical researchers Chuanjun Zhuo  & Li Li (2014) found that neurofeedback training improved motor and vocal tic symptoms (e.g. a reduction in the frequency and intensity of tics) in adolescents with refractory Tourette syndrome. Two patients, aged respectively 14 and 16 years, had suffered considerable side effects from first line anticonvulsants and antipsychotic medications (haloperidol and tiapride) with no notable decrease in their symptoms. After eighty sessions of NFT followed by imagery exercises patients were assessed in the severity and frequency of motor tic symptoms including vocalisations and jerking bodily movements. Results showed combination therapy of imagery and NFT serves to signficantly decrease involuntary tics associated with this form refractory Tourettes that is unresponsive to medication. Thus, establishing NFT as an attractive treatment for these indivudals with further research pending.

Strohmayer and Libertto (2004) presented research at the 35th annual meeting of the association for applied psychophysiology and biofeedback. The researchers provided evidence for the efficacy of neurofeedback using a double blind design, reporting findings of three subjects that had completed the study to date. All three participants were given SMR training, and after 40 sessions, two of the three subjects demonstrated an increase in production of SMR and a positive change in theta/beta ratio. Tic ratings and related symptoms improved for these two participants, but not for the third at 6 week follow-up. These findings demonstrate the positive effects of tic disorder symptoms following neurofeedback training to increase SMR.

Early research dating back to Tansey (1986) presents a clinical treatment of GTS using EEG sensorimotor rhythm biofeedback. In this case study the complex tic was eliminated via this training procedure. It was therefore hypothesized that this training of the sensorimotor cortex results in increased voluntary muscle control and an elimination of tics.