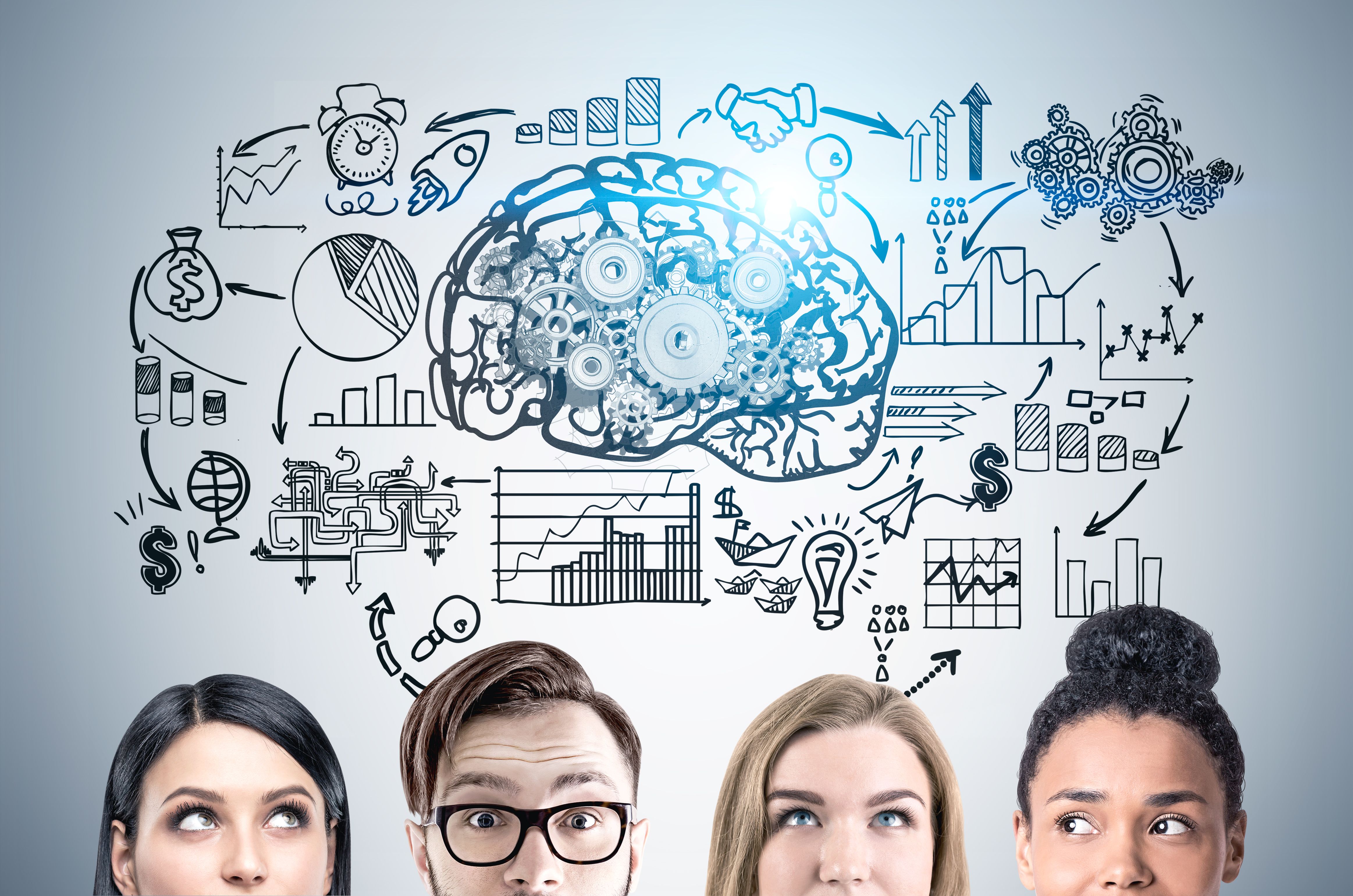 All humans will experience some fear or anxiety, as it has protective functions (e.g. running away from a lion because you fear it will eat you) and can occasionally enhance our performance. However, when fear, anxiety or worry becomes uncontrollable and begins affecting an individual’s well-being,  this may develop into an anxiety disorder. Anxiety disorders arise from a combination of genetic and environmental factors. Studies have shown that these conditions often run in families, suggesting that there may be at least some genetic basis for their development. Environmental factors such as traumatic experiences can also play a role.

Anxiety and stress are highly associated with cognitive impairments, as the neural systems involved in emotion and cognitive control are highly interconnected. Thus anxiety can create a loss of cognitive control and issues with cognitive processing, such as attention and problem solving impairments. Significant ongoing anxiety or stress can even create structural changes in the prefrontal cortex. This may explain why some many people who suffer from chronic stress or anxiety engage in maladaptive behaviours such as drug abuse, smoking, excessive alcohol consumption and over-eating.

THE ROLE OF NEUROFEEDBACK

Neurofeedback (NF) can help regulate the brain to change how it responds to stimuli that disturb our physical or mental equilibrium. People suffering from anxiety disorders often have over-activation in brain regions such as the right insula, hippocampus and amygdala, and NF enables people to consciously control that activation, reducing their anxiety levels. Most randomised controlled trials have shown NF to be as effective as other relaxation and self-control methods (e.g. progressive muscle relaxation and meditation) in reducing anxiety.

A literature review by Linhartova and colleagues (2019) examined fMRI neurofeedback and the efficacy in treating emotional regulation. 51 studies in this type of neurofeedback were identified. The results showed that NF in various brain regions (amygdala, anterior insula, and anterior cingulate cortex) induces some effects on brain regulation, cognitive variables, and clinical variables. Generally, the success of  NF training is related to the combination of target brain region, the type of emotion regulation task, and the population undergoing the training. In terms of patient groups, the strongest support for the beneficial effects of fMRI-NF has been shown in increased positive emotion experiencing in patients with depression and in decreased anxiety in patients with anxiety disorders. Symptom reduction following NF training has been also reported in patients with PTSD, BPD, and schizophrenia.

Using randomised controlled trials, Schoneveld and colleagues (2018) explored the effects of Cognitive Behavioural Therapy (CBT) and MindLight (a 3D third person neurofeedback video game) on self and parent-reported anxious children aged between 8 and 12 years of age. Results showed that MindLight was equally as effective as CBT in reducing self and parent-reported anxiety in the children. These results were sustained at 3 month and 6 month follow ups. The benefits of using MindLight over CBT are that it is cost effective and requires minimal overheads because there is no teacher or clinician required, the game can be easily incorporated into school programs as an intervention and prevention strategy, and there is less stigma associated with the playing of a computer game compared to seeing a therapist.

Mennella, Patron and Palomba (2017) from the University of Padova (Italy) used NF training to specifically increase frontal alpha asymmetry – the right hemisphere was trained to have greater alpha than the left hemisphere – and evaluated the related changes in affect, anxiety and depression. Compared to controls, the NF group demonstrated an increase in alpha asymmetry, and this corresponded to a reduction in negative affect and anxiety symptoms from pre- to post-intervention. These findings provided strong evidence of the effectiveness of inducing frontal alpha asymmetry through NF in reducing negative affect and anxiety. This has high significance for the treatment of conditions characterised by affect dysregulation, including anxiety and depression.

Emmanouil Benioudakis and colleagues (2016) examined the effects of NF training on  anxiety and fear ratings among cancer patients. It was found that 20 sessions of  NF training led to a significant decrease in state anxiety in a 54 year old patient with pelvic cancer and anxiety, after 20 sessions over a 6-month period. This study provided preliminary evidence and prompted further investigation into the effectiveness of NF in treating anxiety comorbid with a range of disorders.

Seyed Hosseini and colleagues (2016) conducted a randomised controlled clinical trial study to determine if NF was effective in reducing the symptomology of generalised anxiety disorder (GAD) in military staff. Thirty participants were assigned to either a control or NF training group. The NF group received 12 sessions of NF training, while the control did not receive any intervention. The NF training led to a significant reduction in GAD symptom severity among military staff.

Anna Zilverstand and associates (2015) from the Maastricht University (Netherlands) recruited 18 females with spider phobia to participate in a single-blind, randomised controlled study. The study aimed to investigate if NF training with fMRI would facilitate anxiety regulation through cognitive reappraisal of maladaptive beliefs. Participants were assigned to either a control or a NF condition. Participants who received NF training reported lower levels of anxiety than the control group. Furthermore, only participants in the NF group demonstrated a reduction in activation levels in the insula by cognitive reappraisal. Over time, differences between the two groups became more pronounced, indicating that learning is a mechanism behind this effect. It was also found that for those in the NF group, changes in insula activation levels during training were associated with long-term anxiety reduction. These findings suggest that self-regulation of brain activity in regions associated with emotion processing and regulation is effective in reducing anxiety and fear.

Lucas Koberda (2014) from the Tallahassee Neurobalance Centre (USA) found that low-resolution electromagnetic tomography (LORETA) Z-score NF training significantly reduced anxiety symptoms in 24 (out of 31) neuropsychiatric patients. The researchers suggested that the intervention was effective because it specifically targeted cortical regions which were disregulated including the anterior cingulate and prefrontal cortex.

Seyed Sadjadi and Peyman Hashemian (2014) investigated the effect of NF on  24 children (aged 7-12) with separation-anxiety disorder.  Compared to placebo, the NF training group experienced a significant reduction in separation anxiety.

Dustin Scheinost and colleagues (2013), from Yale University, used NF with fMRI to reduce contamination anxiety. The researchers found that a region in the orbitofrontal cortex was associated with contamination anxiety, and thus measured activity in that area in real time, allowing them to learn how to modulate that region of the brain. Changes in resting-state connectivity in the orbitofrontal region correlated with improvements in anxiety. These positive results were still present a number of days after the training, and it was also found that participants who received a sham feedback control task displayed neither a change in resting-state connectivity nor an improvement in anxiety. These results suggest that NF training allows individuals to exercise more control over their anxiety, by continually reorganising relevant brain networks. The findings of this study highlight the potential of neurofeedback as a clinically useful therapy for anxiety.

Alvaro Dias and Adrian van Deusen (2011) proposed and tested a new treatment protocol for anxiety comorbid with depression, which integrated existing protocols to maximise its effectiveness. Their review of current protocols revealed that EEG treatments for depression focused on either inverting the high alpha dominance in the left cortex, or reducing the theta/beta ratio in the left prefrontal cortex. Therefore, the new protocol involved asymmetrical alpha training, targeting theta/beta ratios in the left prefrontal cortex, and down-regulating Beta-3 rhythms. The results revealed that the protocol was effective in decreasing anxiety symptoms in individuals with a diagnosis of depression. Importantly, this study introduced a new NF protocol for further investigation, incorporating training demands specific to the patient.

Afsaneh Moradi and colleagues (2011) examined the effects of beta-increase and alpha- increase EEG feedback training as well as alpha-theta biofeedback training in two patients diagnosed with an anxiety disorder. To measure treatment efficacy, clinician symptom checklists and and patients’ self reports were used. It was found that at three-month follow-up, 30 sessions of NF had significantly reduced anxiety symptoms in both patients. After one year, all clinician symptom scales were within the normal range, and self-reports confirmed that the patients were no longer experiencing symptoms of anxiety. These findings attest to the long-lasting benefits of NF training, which contrasts sharply with pharmacological interventions for anxiety that must be continuously taken in order for the patient to benefit from the treatment.

Croydon Hammond (2005) from the University of Utah, found that NF successfully decreased levels of test anxiety in individuals with test anxiety and/or phobias, by increasing alpha rhythms and decreasing left prefrontal alpha levels. Importantly, the study provided evidence for the efficacy of EEG biofeedback as an alternative to other more invasive treatments such as medication, electroconvulsive therapy and high transcranial magnetic stimulation.

Rice, Blanchard and Purcell (1993) compared the effects of frontal electromyography (EMG) feedback, EEG alpha-increase/decrease feedback with pseudo-meditation and wait-list contol on anxiety levels among 45 participants with generalised anxiety disorder. Only EMG and alpha-increase interventions revealed significant improvements in anxiety levels, consistent with the growing body of research underlining the alpha-anxiety relationship and the rationale for neurofeedback as an intervention for reducing anxiety. Additionally, the alpha-increase group had reduced heart rate reactivity to stress compared to the alpha-decrease group, implying the ability for physiological changes. Improvements in anxiety were maintained at 6 weeks follow-up, implying lasting effects for EMG and alpha-based neurofeedback.

Garrett and Silver (1976) examined the effects of alpha enhancement on test anxiety among 163 students. Results revealed improved test anxiety scores among the combined alpha and EMG biofeedback group, compared to baseline scores, as assessed by the Debilitating Anxiety Scale. This difference was statistically significant to the control group, which did not show any changes. In a follow up study, Garrett and Silver revealed that alpha-enhancement, EMG voltage reduction and combined alpha-enhancement had a significant reduction in test anxiety by at least 30% over baseline.  On the other hand, the relaxation group and without-intervention group had not significant reduction, implying that improvements were not attributed to a placebo effect.

Sittenfeld, Budzynski and Stoyva (1976) investigated the effect of theta-enhancement training on arousal levels. Increased theta levels were present in High-frontal-EMG subjects only if they were initially trained in EMG biofeedback. On the other hand, low-EMG subjects were less aroused if they did not have the initial biofeedback training. Importantly, electroencephalogram (EEG) changes did not reflect a general relaxation effect as EEG changes were specific to increases only in theta without changes in alpha. All subjects had significant increases in theta and significant decreases in EMG and heart rate, implying a strong negative correlation between theta and arousal.

Garrett BL, Silver MP The use of EMG and alpha biofeedback to relieve test anxiety in college students. In: Wickramasekera I (ed). Biofeedback, Behavior Therapy, and Hypnosis. Chicago, IL: Nelson-Hall; 1976.

Michael, A. J., Krishnaswamy, S., & Mohamed, J. (2005). An open label study of the use of EEG biofeedback using beta training to reduce anxiety for patients with cardiac events. Neuropsychiatric disease and treatment, 1(4), 357.